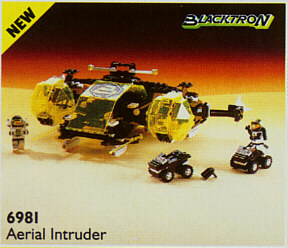 Blacktron – Future Generation: Aerial Intruder – Aerial Intruder Rating: Double orb design is very cool albeit derivative of the earlier Star Defender Futuron craft Cons: It does no good to complain about Lego ships not closing completely, that design flaw is here to stay. Joseph Gonzalez From the laboratories of Blacktron Industries and the ashes of a signed peace treaty that was never meant to be kept, rises a dark phoenix of intergalactic warfare. Armed with an array of medium to heavy firepower, two deathjet pods and surface vehicles that will allow shock troopers to sift through rubble and wreckage, Blacktron engineers work day and night in covert underground stations to mass produce the new destruction-dispensing ship.

No more worries about recovering confiscated and impounded Blacktron I series ships. The new generation is here, and at its head is the Aerial Intruder!

The Aerial Intruder is a two-man ship composed of two individual miniships located on either side of a main body frame. Each miniship is identical to the other. The main body of the AI from a top view is in the shape of a “T” with the main column being a holding area for two mini land vehicles.

This holding area is covered with a large one-piece transparent shell that is able to lock down. Despite the fact that this holding area has no real walls on the left and right side, the cars remain fairly secure within when the shell is locked down I put the ship through numerous barrel rolls to try to shake the cars loose. When the ship lands and the shell is unlocked and lifted, the ramp that the cars are loaded onto descends at an angle to release the cars for traveling.

That being said, you better make sure you keep the shell locked during flight, or your cars are going to end up floating in somebody’s atmosphere. Directly behind the vehicle storage area there is a six-by-six octagon hatch that flips up to store a Blacktron jetpack.

The rest of the central body unit is mainly struts, plates and thrusters. On each side of the central column of the main ship are two one-man transports that I call “orb-jets” for their unique design. The design of each craft is basically a large transparent orb that lebo pilot sits in, while the propulsion unit that sits directly behind each orb has a lateral fin on each side and a dorsal fin on the back. The two side fins each sport what could be two lasers.

With these three fins located just behind the piloting sphere, the little ship has kind of a Star Trek look. The orb-jets are very cool looking ships, and when attached to the main body of the Aerial Intruder, give its already decent appearance an even more attractive look although without the two miniships, the main ship is pilotless. There are two Blacktron minifigs included with this model, each comes manned with a white laser actually used as control sticks lebo the miniships, but I remove them for individual exploration or confrontations.

The first of the unique bricks that I found in this set was the large one-piece shell that is used on the main body of the ship. This piece stands eleven bricks high and is also used with the Alpha Centauri Outpost as sections of space station walls, it sports the big B logo for Blacktron II which I could do without if I choose to use this with some other theme, but I do like the transparent fluorescent green color.

ANDREW ELMHORST DOWN UNDER DEALS PDF

The other particularly unique piece with the set is the 6×6 brick that matches the size and shape of the 6×6 octagon hatch on the back of the central body. This brick is a great complement to the clear octagon shells and it has its own hinge for the hatch brick allowing the octagon hatch to close flush against its surface. I have no levo complaints with this set except that to use the jetpack on a minifig the minifig’s head has 69981 be removed and then put on again and vice versa to remove the jetpack.

I would have liked something that could just slide on and off. Actually I was happy just to be able to find his model after coming out of a second dark ages in Much thanks to Remco Slotboom for helping me to acquire ,ego set. I have read a lot of comments about how Blacktron II never equaled the coolness of the original sub-theme and I’ll concede the fact that BTII uniforms are pretty dorky-looking compared to the first Blacktron’s flight suits.

But in my opinion, this and a couple lsgo the other BTII models stand up well in comparison to the original sub-theme’s models. What do you think?